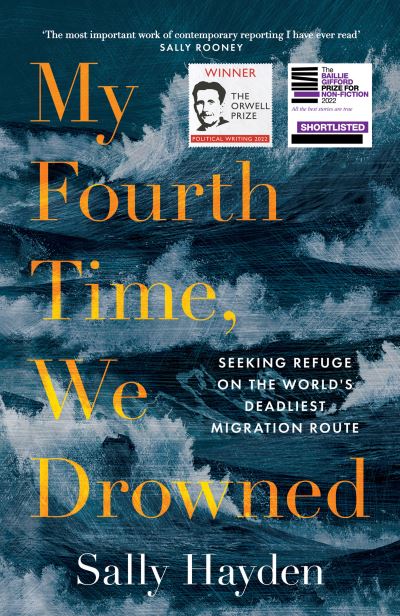 My Fourth Time, We Drowned

SHORTLISTED FOR THE ORWELL PRIZE 2022SHORTLISTED FOR THE MICHEL DÉON PRIZE 2022'The most important work of contemporary reporting I have ever read' SALLY ROONEY'Journalism of the most urgent kind' FINANCIAL TIMES The Western world has turned its back on refugees, fuelling one of the most devastating human rights disasters in history. In August 2018, Sally Hayden received a Facebook message. 'Hi sister Sally, we need your help,' it read. 'We are under bad condition in Libya prison. If you have time, I will tell you all the story.' More messages followed from more refugees. They told stories of enslavement and trafficking, torture and murder, tuberculosis and sexual abuse. And they revealed something else: that they were all incarcerated as a direct result of European policy. From there began a staggering investigation into the migrant crisis across North Africa. This book follows the shocking experiences of refugees seeking sanctuary, but it also surveys the bigger picture: the negligence of NGOs and corruption within the United Nations. The economics of the twenty-first-century slave trade and the EU's bankrolling of Libyan militias. The trials of people smugglers, the frustrations of aid workers, the loopholes refugees seek out and the role of social media in crowdfunding ransoms. Who was accountable for the abuse? Where were the people finding solutions? Why wasn't it being widely reported? At its heart, this is a book about people who have made unimaginable choices, risking everything to survive in a system that wants them to be silent and disappear. MORE PRAISE 'Compassionate, brave, enraging, beautifully written and incredibly well researched. Hayden exposes the truth' OLIVER BULLOUGH 'Blistering' LINDSEY HILSUM 'The most riveting, detailed and damning account' CHRISTINA LAMB 'One of the most important testaments of this awful time in life's history. It is both heartbreaking and stoic. I cry reading any page of it' EDNA O'BRIEN